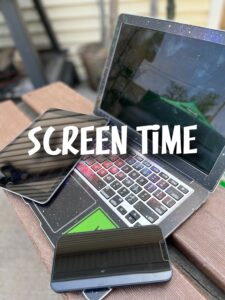 We could be those parents who never allow their kids to have any screen time. We also could find a pot of gold at the end of a rainbow while riding a unicorn, but that’s a little unrealistic don’t you think? Our world today runs on screens. I am writing this blog on a screen right now. It would be impossible to not allow kids on screens at all. “But screens are terrible for children’s development.” Ok, Karen, calm down. Sometimes it’s a necessary evil. So how can you manage screen time?

We set a lot of rules for screen time in our house. The kids are required to turn in any gaming devices or tablets before bed. They would literally be on them until their body forced them to fall asleep otherwise. I allow Trent to use his more often because he is a huge lego nerd and watches videos on how to build things while he’s building. That’s another key. What are they using them for? I think they can be a super useful tool in learning. Remember when we had to use encyclopedias or dig through old books in the library?

Time limits are also a good thing to have. Even as an adult I have fallen into the trap of marathoning a TV show unintentionally all day. Set a timer for an hour or two and then force them to go outside or play with one of the millions of toys they begged you to buy and never played with.

Don’t guilt yourself. Sometimes we just need a break and the only thing to get them to be quiet is watching TV. That’s ok. Your kids brains aren’t melting because they are watching Cartoon Network while you read a book.
Basically what I am saying is everything in moderation. YouTube and TV can play a key role in your child’s development and create some awesome bonding time between you and your kids as well. I wrote about having movie nights in a previous blog post. Your kids aren’t turning into mindless robots and you aren’t a bad parent for allowing them to watch a dumb cartoon once in a while.